Whiplash 1—Additional Tariff Increases from China and the U.S.

On Friday, August 23rd, China’s Ministry of Finance announced it would increase tariffs on $75 billion of U.S. exports to that country. With that announcement, the administration hit back by increasing tariffs, already in place from 25-30% on October 1. It would then further increase the proposed new tariffs implemented on September 1 and December 15.

To add to the President’s ire on Friday, a speech by Federal Reserve Chair Jay Powell did not signal an imminent cut in the funds rate. Nor did Chair Powell indicate the type of deep funds rate cut the Administration called for.

With those events, the President further reacted by threatening to order U.S. companies to leave China. The threat comes under the International Emergency Powers Act of 1977. That threat seemed to come from a reaction to Chairman Powell’s lack of specificity on rate cuts. Later the administration pulled back from that threat. Nonetheless, these actions resulted in a major drop in the equity markets on Friday.

REVERSE WHIPLASH— “CALM” FROM BOTH PARTIES

Monday, August 26th, at the Group of Seven (G-7) meeting in France, the President showed a less strident position on trade. At the same time, Monday morning — Sunday night in China — the South China Morning Post reported Vice-Premier Liu as saying China “resolutely opposes the escalation of the trade war” with the United States and instead welcomes “calm negotiations.” Calm negotiations might not be the term most would use to describe the recent trade war’s tit-for-tat actions. The equity markets reacted very positively to the calming tones.

IMPORTANCE OF EXPORTS TO THE U.S. AND CHINA’S ECONOMIES

The uncertainties created by the President’s tweets and the responses from China create an uncertain economic environment for business planning and investment. At the same time, despite consumer surveys showing a pullback in their optimism (see Figure 1), retailers reported strong results—admittedly for the past second quarter.

Nonetheless, with the uncertainties created by the trade war, economists show increasing concern about the possibility of a recession sometime in 2020. Figure 2 shows the New York Fed’s increasing probability calculation of a recession in the next twelve months.

PROBABILITY OF US RECESSION PREDICTED BY TREASURY SPREAD 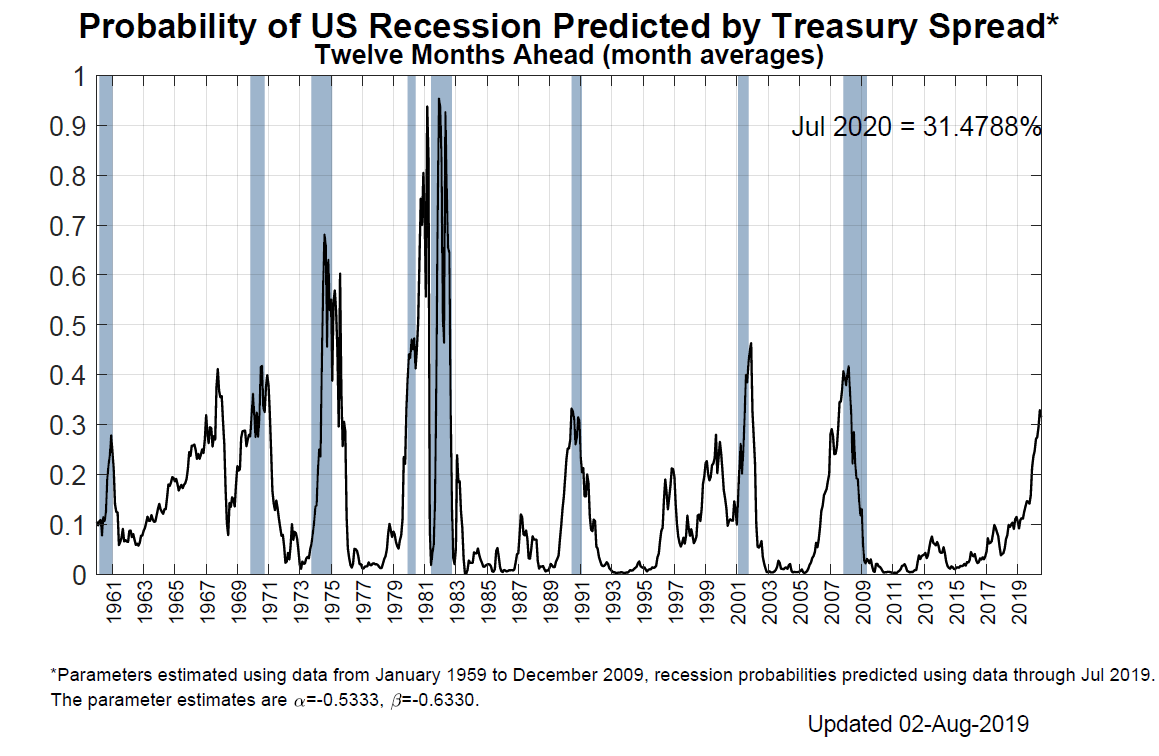 Recession Threat and the Presidential Election

With the upcoming presidential election in 2020, President Trump’s current seemingly high-risk economic course surprises many observers. Without a quick trade settlement, he faces the possibility of an economic slowdown reducing his chances for re-election. As a result, we would expect the President to recognize those diminishing odds. That recognition, in our view, will likely cause him to settle for a partial agreement.

Investors continue to face a global game of chicken between President Trump and Xi. While they play this game, the global economy will likely suffer. Even with an eventual trade agreement, businesses will re-evaluate the likely changes the trade war brought to global trade and their business organizations. The re-evaluation will likely result in significant alteration as to how the world does business.

The tweets and headlines do not fit into traditional economic inputs and analysis. Therefore, until an eventual trade settlement, investors will face uncertain market volatility. In the past, based on our firm’s work, typical equity fund managers showed a lack of success timing the equity markets. In our view, adding on the continuing random tweets and headlines to the normal economic uncertainties makes timing to outperform the equity markets nearly impossible. In that light, our recommendation continues to emphasize a diversified portfolio consisting of a balanced portfolio of equities, fixed income, and alternatives.